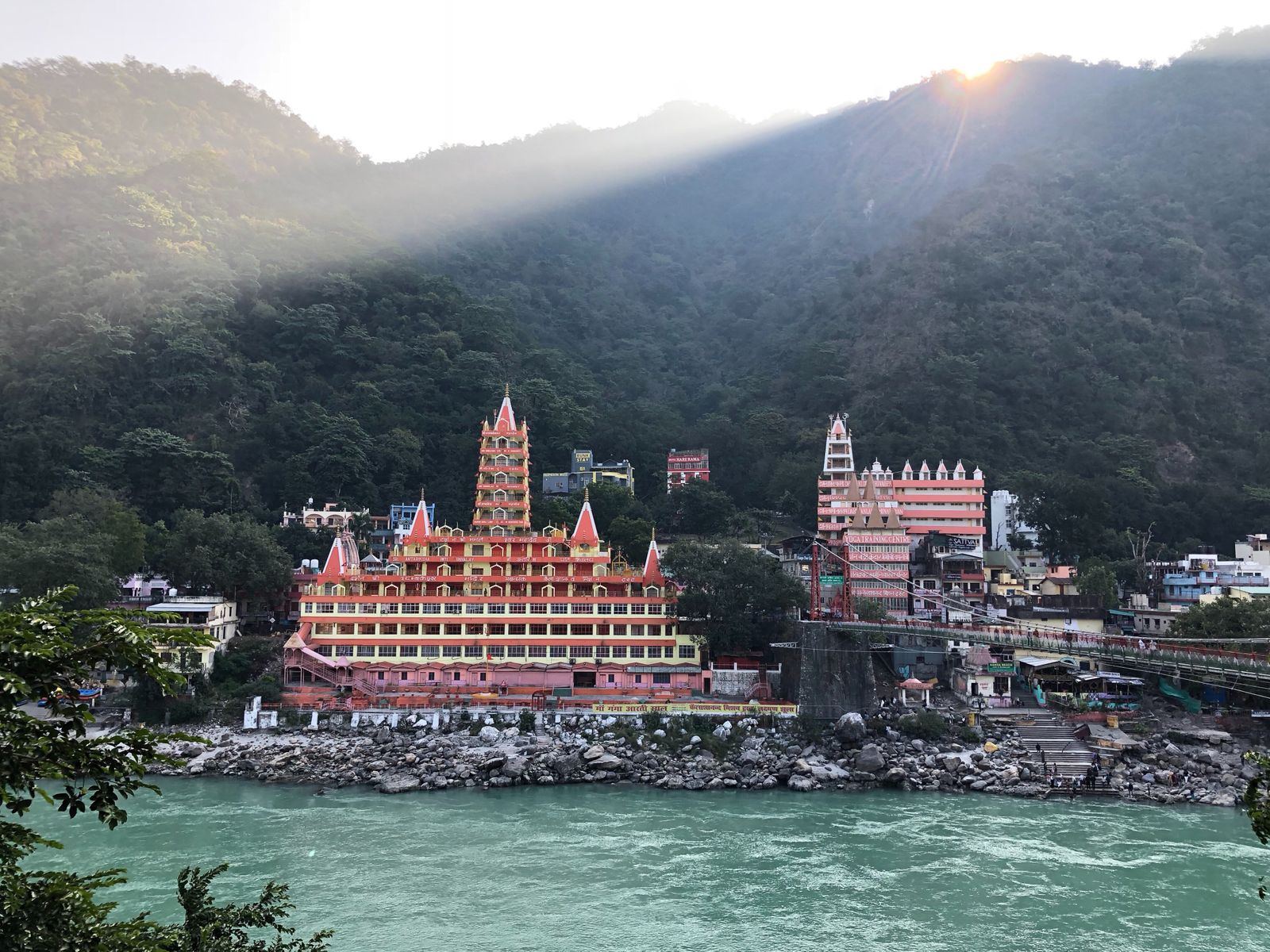 It was already dark as we gathered next to the fire. Sitting on the ground, it was us with about 25 other foreigners who were mostly middle-aged women dressed in white drapey clothes and the ashram’s guru. One of older women sat with the microphone, while some sat with small drums or tambourines. “Okay, so let’s begin. Today’s Kirtan is about the divine mother, Maa. So all songs will be dedicated to her and if you would like to lead the next song, please do.” Kirtan is soulful chanting and singing and is practiced in some types of yoga. Neither of us have ever participated in a Kirtan, which is why we were curious to join.

And so it begin. We joined in the chants, saying “Jai Maa” over and over as well as other Hindi phrases which we didn’t quite understand. As we tried to sing along, we watched others fully embracing the moment, clasping their hearts to the words and playing the drums to the beat. Midway through, the guru received a text message and got up and left while we continued on. When the hour-long Kirtan was over, Jun and I looked at each other with looks that obviously showed we both felt out of place. “That was weird.”, we collectively decided as we walked out of the ashram never to return again.

Rishikesh is known for being the birthplace of yoga and is set at the foothills of the Himalayas. It's also where The Beatles famously came to meditate during the 60’s. We heard only good things from friends who had visited and we thought it could be an interesting place to do some yoga and meditation. Neither of us are very spiritual or anywhere near attempting a yoga teacher certification, but we both like a good child’s pose and were interested in spending some time in ashrams.

Upon arrival, the first thing you notice is the beauty. The green mountains, the clean air and the aqua-colored Ganges rushing through the city. Even the Ganges impressed me. I had no idea it would be so clear and blue considering all of the pollution, open defecation, dead bodies, etc., that I had read about. Cows, dogs and monkeys all wander around freely as a part of everyday life and at times you even feel that this is how life could be, all creatures in co-existence. Attending the Ganga Aarti’s, which are daily rituals performed at dusk by the Ganges River where an offering in the form of fire are given to the Goddess Ganga, were awe-inspiring as well.

Indians from all over the world travel to visit the sacred Ganges River. Foreigners from all over the world flock in search of a spiritual retreat, an escape from the western world and from their everyday. So much so that places feel almost catered to helping foreigners “find themselves” through yoga, meditation and a vegetarian diet. This includes the ashram we were at. It felt weird, like a stop on an Eat, Pray, Love tour (do those exist?). And while, I think it’s great if people are able to find themselves in Rishikesh, I found the atmosphere of the ashram we were at a bit odd.

In short, Rishikesh is a beautiful place to visit if you are seeking relaxation, meditation or spirituality in general. If you are looking to find yourself, just be aware that thousands of other people will be there looking for the same thing.

Food:
No alcohol or meat - There is no meat or alcohol in Rishikesh due to the holy nature of the city. Keep it in mind if it's a make or break for you.I found the food much more catered to tourists/overpriced and had more difficulty here finding places I loved. If you know of any great places, please let me know where!

Do:
Ganga Aarti - Daily rituals performed at dusk by the Ganges River where an offering in the form of fire are given to the Goddess Ganga. Would recommend checking out both the Ganga Aarti at Parmarth Niketan and Triveni Ghat.

River rafting - Rafting is one of the most popular activities in Rishikesh. There are some environmental concers about it though, so research before booking.

Ashrams - I would wait to book an ashram until you are in Rishikesh to take a look and see which one is the best fit for you. Also, lots of the yoga/meditation programs we saw online were way overpriced compared to what we found in person once we were there.