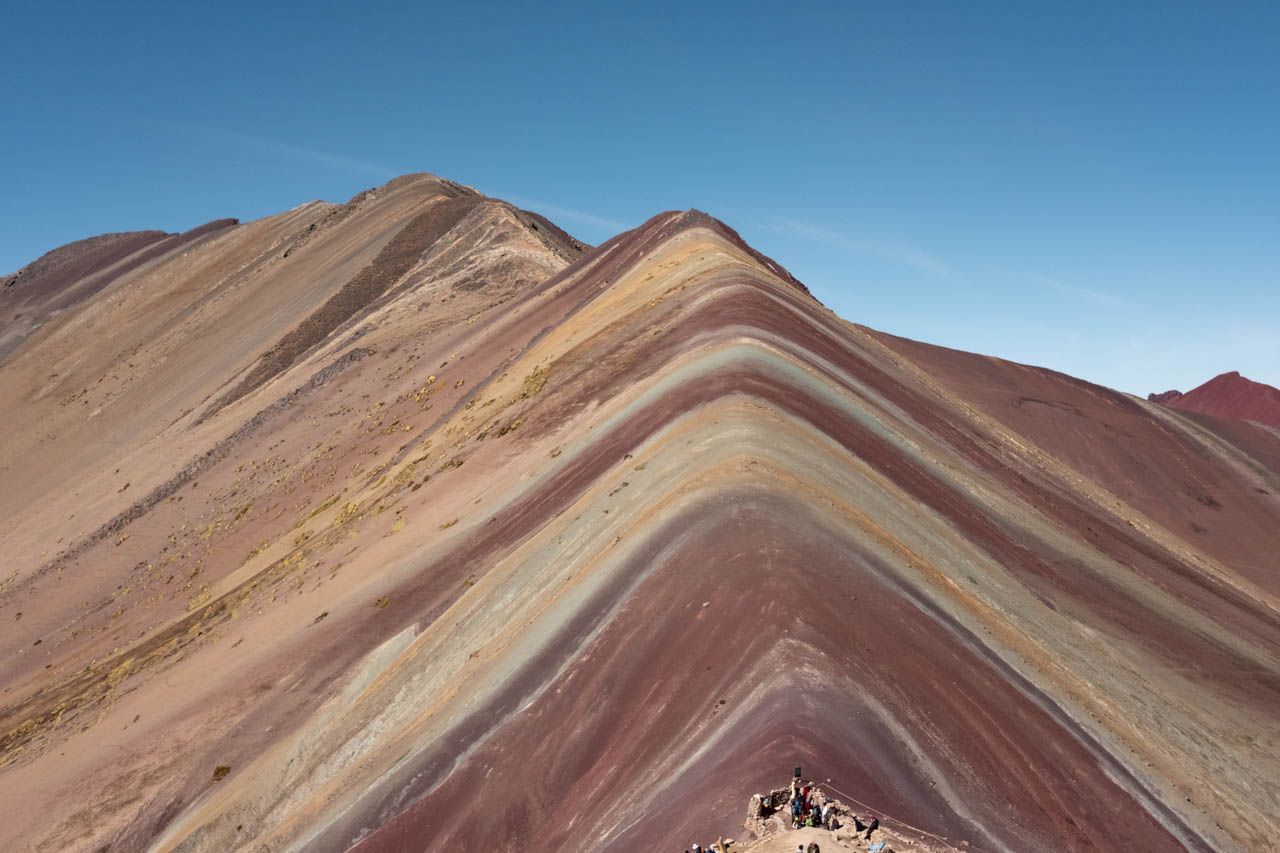 Rainbow Mountain, or Vinicunca is no joke. At an altitude of 5,200 meters, the hike up is a constant struggle to breathe.

The payoff? A mountain range covered in multi-colored stripes due different sediments. It was only 'discovered' in the last few years due to melting snow (yay global warming) and has since become a must while in Peru. We decided to check it out to see if it’s worth the hype.

In the morning, after much confusion due to my broken survival Spanish speaking skills, we were picked up at 3 am and then started the 4 hour drive up to the mountain. Once there, we had an initial 10 minute ‘hiking test’ with our guide to see who needed/wanted to ride a horse up instead of walking. It's insane how thin the air is. Never take oxygen for granted. We decided against the horse as tempting as it was. I was surprised that out of our group of 10, only 4 of us decided to walk.

After struggling to breathe and walk and talk at the same time for about an hour and a half, we finally arrived at the top. The guide suggested we stay at the very top for a maximum of 40 minutes due to potential altitude sickness. The view was surreal and the colors were more distinct than I imagined. I’ve read some blogs where people were disappointed that it didn’t look like the weirdly colored photoshopped versions (y tho) floating around on the internet. Don’t expect that and you will not be disappointed.

The 40 minutes at the top went by quickly, and we started the hike back down. Our group, tired and sunburned, then went for a much deserved lunch. By the time we arrived back in Cusco around 3pm, I was exhausted and immediately showered and took a nap.

The verdict: It’s a trek to get there and it’s even more of a trek up. It ended up being the hardest hike we did in Peru due to the altitude, but it's well worth it. It’s literally breathtaking.

Tips:
-Tour Operators: In Cusco, you’ll see a million different operators offering the day tour to Rainbow Mountain. We wanted to make sure we left as early as possible to avoid the crowds and because we heard that the sky is clearer in the morning. After looking around, we felt like it was worth it to pay a little more to make sure that we left earlier, so we ended up booking with Rainbow Mountain Travels online for $30 USD, one of the pricier ones. You are also expected to tip your guide at the end.

-Red Valley: We didn’t go, but I’ve heard it’s worth it. Consider adding this to the itinerary since it’s so close by.

-Altitude: You need to acclimate for 1-2 days before going hiking up Rainbow Mountain. Otherwise, you are more at risk of getting altitude sickness. No fun and not worth it.

-Sunscreen: Wear it. Everyone was sunburned by the end of the trip.

-Clothing: It’s cold. We went in mid August and a warm hat and gloves were 100% necessary. Also wear hiking boots. We saw several people in running shoes struggling to walk around the ice patches.